A self-paced, open course to build your research skills

Contact us at libhelp@brocku.ca or find more library help on our Research Support page.

While this is the general timeline from event to recorded knowledge, not all events will merit scholarly research. In addition, at any time, information can return to the beginning stages of the timeline if related events happen to bring it to public attention. 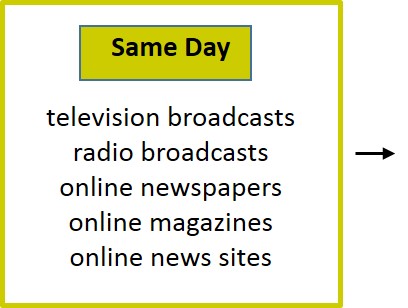 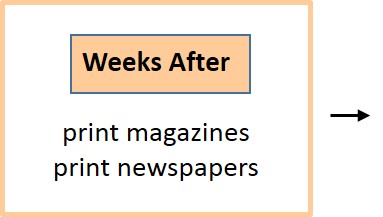 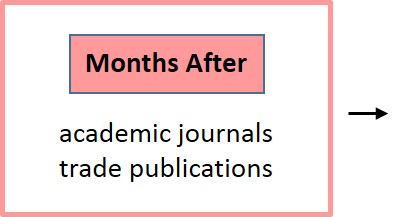 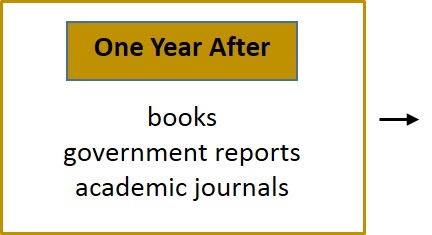 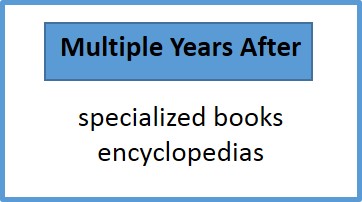 The following example follows an actual event as it progresses through the stages of the information timeline. The event is the Deepwater Horizon oil spill, commonly referred to as the BP oil disaster, in the Gulf of Mexico.

At approximately 9:45 pm on April 20, 2010 an explosion and fire are reported on the BP Deepwater Horizon oil facility located in the Gulf of Mexico. At this exact moment, the only witnesses with potential information are those unfortunate enough to be in the vicinity.

That same evening, reports begin to appear online and on television and radio programs like New York Times online, CNN, and NPR. The only information available at this time is from a few eyewitnesses, local responders, and company representatives.

Within weeks, popular print and online magazines like Time and Newsweek have compiled reports that are slightly more complete for a general audience. There are few technical details, and while some verification has taken place, it is still too early to have a complete picture of the spill or its eventual magnitude.

After a few months have passed, more information has been gathered and scrutinized. Trade magazines and academic journals have begun publishing analysis of the event from credible authors. Systematic studies and reviews appear in publications like the Journal of Coastal Research. Many of these will spawn new areas to research in the future.

After a year, full-length books and government reports are available through print and electronic sources. The books and reports contain in-depth coverage about the event and are for popular or scholarly reading. For example, the book A Hole at the Bottom of the Sea was published within a year of the spill.

As years pass, the oil spill and its aftereffects are included in reference and scholarly books. General and specialized encyclopedias include an overview and basic information about the event. An example would be the entry about the spill that appears in the Gale Encyclopedia of Environmental Health.